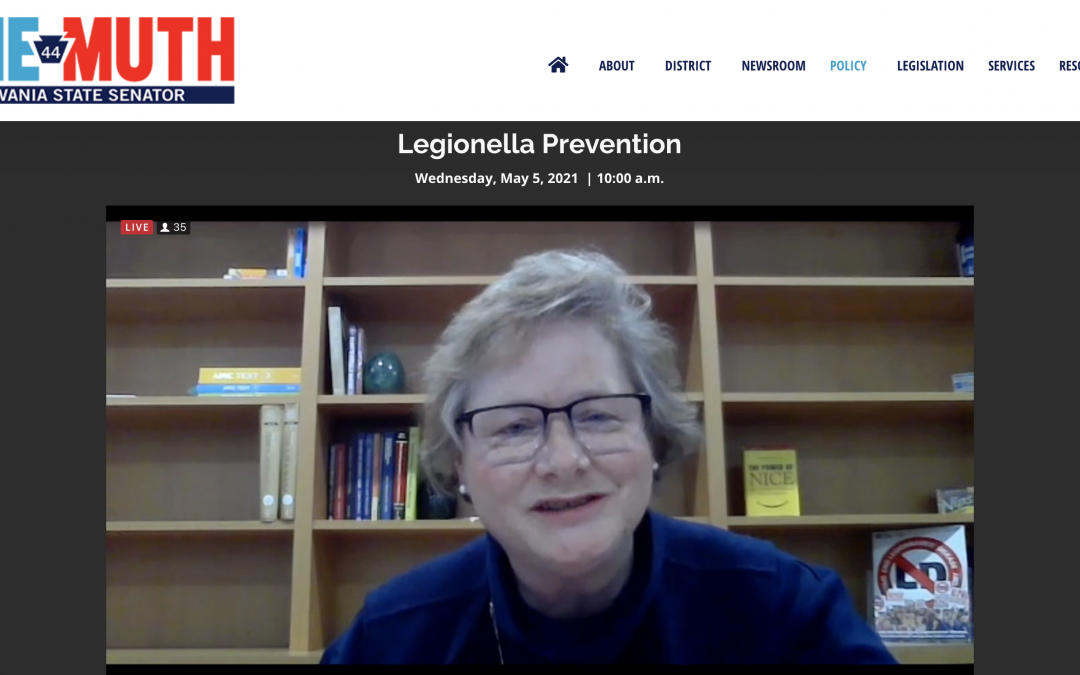 The Pennsylvania Senate Democratic Policy Committee held a virtual policy hearing on Legionella prevention on Wednesday, May 5. Dr. Janet E. Stout, along with other experts in the field of Legionella control, prevention, and remediation, spoke during the second panel of the hearing, “Exploring Senate Bill 1285 (2020) & Necessary Policy Changes”.

Pennsylvania Senate Bill 1285 is also known as the Legionnaires’ Disease Prevention and Reporting Act. Sponsored by Senator Wayne D. Fontana (D-Allegheny), this Act will make Legionella testing a required part of Legionella water management among commercial buildings such as hospitals and long-term care facilities in Pennsylvania. Read the Act in full here.

Why is this Act necessary?

During her verbal testimony, Dr. Stout spoke about the increase in reported cases of Legionnaires’ disease (particularly in Pennsylvania) despite continued guidance from organizations such as the Centers for Disease Control and Prevention (CDC), Centers for Medicare and Medicaid Services (CMS), the Joint Commission, and other industry standards such as ASHRAE Standard 188. Cases have “ballooned,” she said.

“All of those [organizations] have failed at preventing Legionnaires’ disease. And part of the reason that they have failed is because they have not addressed a simple thing that can be done to assess risk of Legionnaires’ disease in hospitals and other buildings. Testing for Legionella is the only direct way to know the risk, whether Legionella is present or not,” said Dr. Stout.

These organizations do not require Legionella testing as part of a building’s water management; they recommend testing, but ultimately the option to test is left up to the discretion of the facility.

“When given a choice,” said Dr. Stout, “a facility or hospital tends to opt not to test for Legionella, and the risk to the patients in the hospitals and nursing homes goes undetected until someone becomes ill.”

In facilities such as hospitals and nursing homes, the risk of death is as high as 30% for healthcare-acquired Legionnaires’ disease. The Legionnaires’ Disease Prevention and Reporting Act will make Legionella testing a required part of Legionella water management in Pennsylvania and bridge the gap that currently exists in regulations.

Does this Act comport with existing public health regulation?

According to Dr. Stout, this Act is not going out on a limb to advance public health law for prevention of building and healthcare-acquired Legionnaires’ disease.

“Following one of the largest outbreaks of Legionnaires’ disease in U.S. history, New York instituted public health measures to prevent this disease. The state of New York included both cooling towers as well as healthcare facilities in their regulation and included testing of these facilities and cooling towers for Legionella prevention.”

Healthcare and long-term care facilities house people with the greatest risk of acquiring Legionnaires’ disease if they are exposed to Legionella in the water system. The requirements proposed in this Act for the diagnosis and testing of water systems are imperative for protecting such a vulnerable population.

According to the CDC, any Legionella species can cause disease under the right conditions.

“[The] presence of any Legionella should trigger response activities,” Dr. Stout said. “This is especially true in healthcare where outbreaks of disease have been caused by both Legionella pneumophila and other Legionella species.”

So, what can be done?

Dr. Stout emphasized that testing for a pathogen with such serious public health and legal implications should not be a DIY activity.

According to Dr. Stout, the CDC supports the position that testing for Legionella should include all members of the Legionella family, and that testing should be performed by an accredited laboratory. This includes “… information about laboratory accreditation and proficiency ensures that the person submitting the sample for analysis that the results are trustworthy and accurate.”